SECAUCUS, N. J. – There’s a killer on the road, and potholes better beware.

In announcing a $15 million plan to patch the state’s roads following an unusually harsh winter, Department of Transportation Commissioner Jack Lettiere oversaw a demonstration by one of the state’s “Pothole Killer” trucks.”

As night follows day, potholes follow snow and ice,” Lettiere told reporters Wednesday at a DOT maintenance yard in Secaucus, as traffic rumbled overhead on an elevated stretch of Route 3. “It is fair and right for our residents to expect potholes to be repaired. Quite frankly, it is a basic, meat-and-potatoes, quality-of-life issue.

“Like a space shuttle or deep sea diving vessel of the asphalt realm, the trucks allow operators to stay inside the vehicle while temporarily filling potholes with a hydraulic robot arm.

“I’ve been in the DOT 17 years, and this accomplishes much more than the usual two-man crew,” said Rowan Hector, 44, who gave the demonstration.

Each of the six white trucks, which have been leased for the past three winters for about $7,000 each per season, is equipped with a 400-gallon vat for liquid tar, plus a bin holding 11,000 pounds, or 5 cubic yards, of gravel.

Taking advantage of the yard’s pockmarked parking lot, Hector drove up to a crater several inches deep and began the four-step patching process: first, a blower at the end of the arm uses air to flush the pothole clear of debris; then, a sprayer applies a layer of tar into the hole; next, a mixture of tar and gravel is dropped into the hole; and finally, dry gravel is spread over the top. In perhaps a small measure of revenge, motorists tamp down the patch the same way the experience the sickening jolt of a pothole: by driving over it.

Despite the state budget crunch, Lettiere said the program is supported by Gov. James E. McGreevey, and the money is available through the department’s fiscal 2003 operating budget and the state Transportation Trust Fund. The program began two weeks ago, he said, with 600 tons of fill already having hit the pavement, using 100 traditional crews in which two workers fill the holes by hand, complimented by the Pothole Killers. As the spring progresses, Lettiere said permanent patches will be applied, and in some cases stretches of roadways will be resurfaced.

Secaucus Mayor Dennis Elwell, a trucking company owner, and Assemblywoman Joan Quigley, a Democrat who represents the district, expressed their gratitude.”One day you pass by and there’s a crack in the road,” Quigley said. “In two days, there’s a moon crater.

“NJDOT has set up a telephone hotline for motorists to report potholes: 1-800-POTHOLE (1-800-768-4653). Motorists may also report potholes online through a link on the department’s Web site. 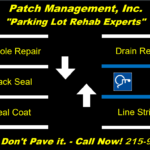